I have been buried in work and more work for the past week, hence no posting. There's nothing exciting about it, I can assure you.

A little more interesting was what I woke up to this morning. 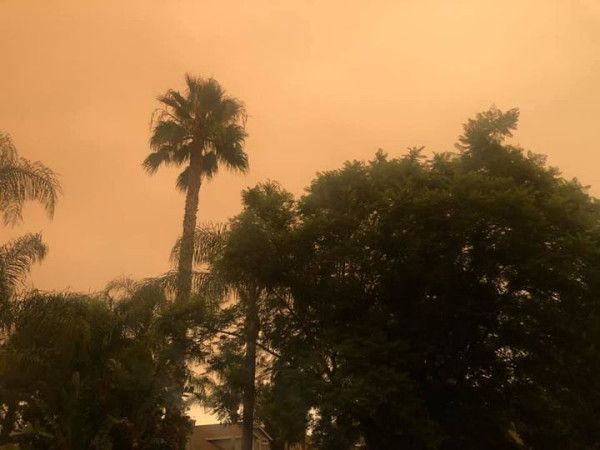 I woke up, rolled over, but saw that it was still dark outside. No big. I wake up too early all the time. Except when I looked at my clock, it was almost 7:30am. Where sunlight should've been streaming in around the curtains, there was darkness. When I peeked outside, the sky was red. Our streetlights were still on until 8:30; that's how dark it was outside. It stayed orange for most of the day, lightening to a dark yellow in the afternoon, then going dark again around 4pm.

In SF, it remained orange and so cloudy, it was like looking through fog. Then, this is what it looked like from a drone four hours ago:

The air quality itself isn't quite as bad as it was yesterday - the fires are so far away, the smoke is entering the upper atmosphere, which is what is interfering with sunlight here - but there is soot and ash all over everything. It's gross outside, except for the fact that blocking the sun has dropped the temperature to a much more tolerable 70F instead of the 116 we had over the weekend. I'll take the positives where I can.

We're safe, so no worries there. But it's still weird. I feel like we're living in a dystopian world (even more than we were with Covid-19 and Trump).
Collapse