What a busy, fun day!

It started out with me and Alex venturing out to our favorite game store for their quarterly Ding & Dent sale, where I spent way too much money: 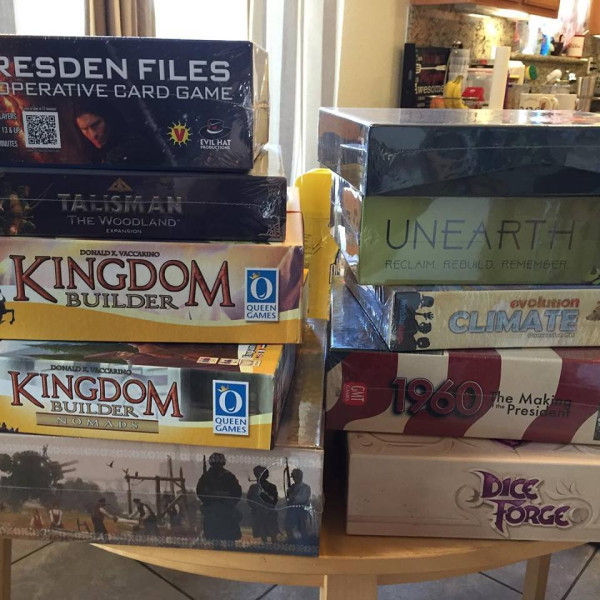 Not pictured are the three D&D manuals Alex got for half off and the game design box he bought for a friend. The sale itself was insane. The store owner reported later that they did double their previous best sales day in the five hours that the sale was running.

I'm not allowed to buy any new games at our annual game convention next weekend, lol.

Then, my very first rehearsal for the short play festival was this afternoon. Because of the nature of the play, I wanted it to be very informal, getting to know each other rather than too much about the play itself. So we spent almost an hour just chatting, learning about each other, what we love about the play, the characters, and so on. I have to say, I love my actors. My male lead worked for 40 years doing forensic science for various government agencies, investigating crime scenes, testifying in court, and so much fun, interesting stuff. And on top of that, he's an amazingly talented actor. And my female lead and I have soooooo much stuff in common. She's a newbie to performing, only getting involved in the past couple of years, but she's got some great instincts, and she's absolutely lovely.

I might've spent most of the time telling them how great they are and how excited I am, lol. But...they are and I am, so I'll own it.

AND today is Alicia's birthday. My baby girl is now 19 years old. Her roommate/best friend (the one who took such good care of her) completely spoiled her which I love. Thankfully, Alicia is feeling tons better, so she could actually enjoy it.
Collapse