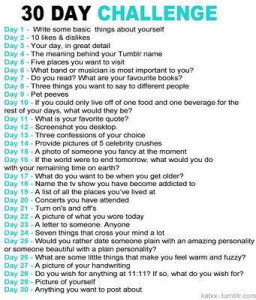 Day 13: Three confessions of your choice

I debated on this one probably longer than I needed to. There are so many ways to take this. It all comes down to what I'm willing to share about myself (I'm actually much more open and willing to it as I get older, I find, mostly because I've stopped caring as much what others might think) and how it might make people feel. In the end, I opted for weird confessions.

1. I can't walk on anything in the ground that looks like it's covering up a hole. Manhole covers. Grates. Those metal doors that hide stairs that go into basements. Anybody who walks down a sidewalk with me will witness me deliberately walking around said items or waiting for people to pass so I have a clear path around. I have even been known to step off the sidewalk to avoid it completely if I have to. Don't bother explaining the engineering that makes this really foolish on my part. It's not going to change anything. I have done it almost all of my life, and I don't see it ending any time soon.

2. I tidy shelves in stores when I go shopping. Especially if it's a section that has to be alphabetical, like books or movies or CDs. I've been known to stand in front of a display and fold shirts that other people have left in disarray, even if I'm not interested in the garments myself.

3. I love Barry Manilow. In fact, Craig took me to see him in concert in 2008, and I adored every single second of it. I sing along to any song of his I hear and usually know all the words.

With those out of the way, today was a baking day. Craig has a co-worker who is leaving the company and her big going away party is tomorrow. So yesterday, Craig asked me to make cookies for him to take. I was already planning on making the sugar cookies for Alicia to give to her boyfriend, so I figured it was no big deal.

Actually, it's fun. The most frustrating were the sugar cookies. I hate making sugar cookies. Frankly, they're too fussy for what is essentially a very bland cookies so I never bother. But I wanted to help Alicia out, so I sucked it up. I have Star Wars cookie cutters I got from Williams-Sonoma, so I used those to make a dozen or so for her to decorate tonight. That dozen cookies took me longer than any of the others, and that's including baking time. I did German chocolate cake cookies, a raspberry crumble bar, and orange creamsicle cookies. I even left a few out for the kids to have afterward...( Collapse )
Collapse